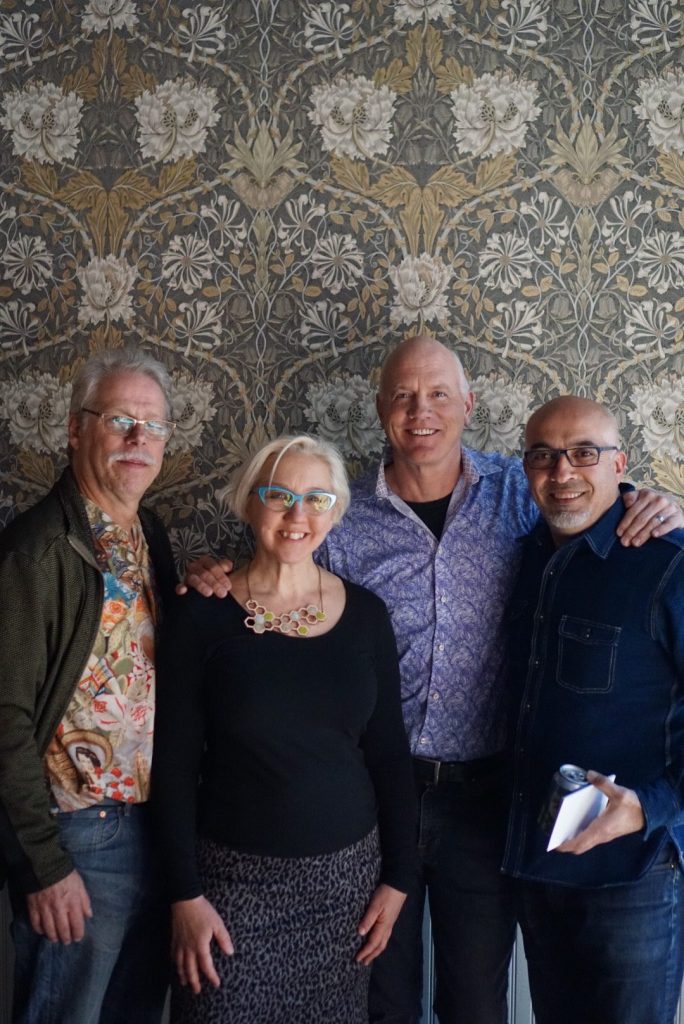 Jane Richlovsky presented a TED talk at Penn State in early 2015. That summer Karen True,  from the Alliance for Pioneer Square, told Greg Smith and Ali Ghambari about it over coffee. A few days later, Ali ran into Jane on the street. “I just watched your TED talk. What’s going on with your building? I’m going to set up a meeting with you and Steve and my friend Greg.”

Six months later, artist and developer, long considered natural enemies in the wild, had formed Good Arts LLC and bought a building together.

Greg Smith  is the founder and CEO of Urban Visions Sustainable Real Estate. Smith was a Principal of his father’s real estate property management firm, Martin Smith Inc., and the Founder/President of MSI’s development subsidiary, Martin Smith Development Corporation. He is a fifth-generation Seattleite whose family’s relationship with Pioneer Square buildings dates back to the 1800’s. Greg has over 30 years of experience in the renovation, restoration, and management of historic buildings in Seattle, including the Dexter Horton, Hogue, Broderick, Alaska, Burke State, Union Trust, Redo, and Colonial Grand Pacific Buildings, the Arctic Hotel, 83 King Street, and the Smith Tower.

Jane Richlovsky is an artist, arts educator, and cultural space advocate, whose paintings have been exhibited in museums and galleries throughout the United States. She has maintained a studio in the Pioneer Square neighborhood since 2001, and was one of over a hundred artists displaced from the Western Building when it was condemned for the Highway 99 Tunnel in 2011. She harnessed her Department of Transportation relocation funds to create ’57 Biscayne, a haven for working artists in the building that became Good Arts. Richlovsky spoke at TEDxPSU (Penn State) in 2015, urging artists to take control of their business and real estate dealings, and advocating for the preservation of affordable spaces for artists in the urban core (When Artists Get Together They Talk About Real Estate.) She is the recipient of grants from the Sugarman Foundation, Vogelstein Foundation, Artist Trust, and the former King County Arts Commission (4Culture), and has served on the faculty of the University of Washington School of Drama, Pratt Fine Arts Center, and Cornish College of the Arts.

Steve Coulter has over thirty years’ experience designing, engineering, and implementing theatrical rigging, lighting, scenery, effects, and stage renovations. He served as the technical director at ACT Theatre from 1998 through 2016, and has done extensive work in theatres throughout the United States, Europe, and Mexico. He designed and drafted the floor plans for ’57 Biscayne studios, and for the Arcade at 108 Cherry.  In his spare time, Steve’s been documenting the history of Seattle’s numerous bygone theatres, including the one that existed in the building’s basement in the 1970s, and has curated public displays of photographs and other ephemera of this rich history.

Ali Ghambari  is the founder of Cherry Street Coffee House, which he co-owns with Greg Smith, and which anchors the Good Arts Building’s corner storefront.  He is the founder of the Iranian American Community Alliance, recipient of the 2015 Seattle Center Foundation American Dream Award, and long-standing pillar of the Pioneer Square community.